After a year away from home, camping sounded like a great way to reconnect and catch up with friends. Although we have gone on road trips before, this was our first camping experience together and we were super excited about it: probably too excited we hit the road a day earlier than planned. Destination: Murchison Falls National Park !

Murchison Falls National Park is located North-West of Kampala (the capital city of Uganda). It can be approached from one of its two sections: Northern or Southern. The Northern section contains the Savannah and is where game drives are experienced while the Southern section is predominantly forest and woodland.

Details of park fees, the ferry schedule and available camp sites can be found here. Remember to carry your national ID or passport or have a soft copy of either documents. The uniformed park guides are well informed and can offer great assistance when selecting a camping site that best suits you.

Activities to keep you excited on a camping trip:

We entered the park through the Kichumbanyobo park gate in Masindi district which leads to the Southern section. We arrived at 8pm and because of park policy were prohibited from entering the park after dark. We opted to spend the first night at Boomu Women’s group camp site where we enjoyed our very own “open air” disco under the beautiful starry night. For our second night, we crossed over to the savannah/Northern section and pitched tent at one of the public camp sites. Because safety in the park is paramount, we hired a game ranger for the night; he also helped us gather wood for the camp fire. Although water is provided at the camp site, it is advisable to fetch and carry tap water from Boomu Women’s group camp site. Also, having a bucket or in our case a watering-can comes in handy during shower hour. 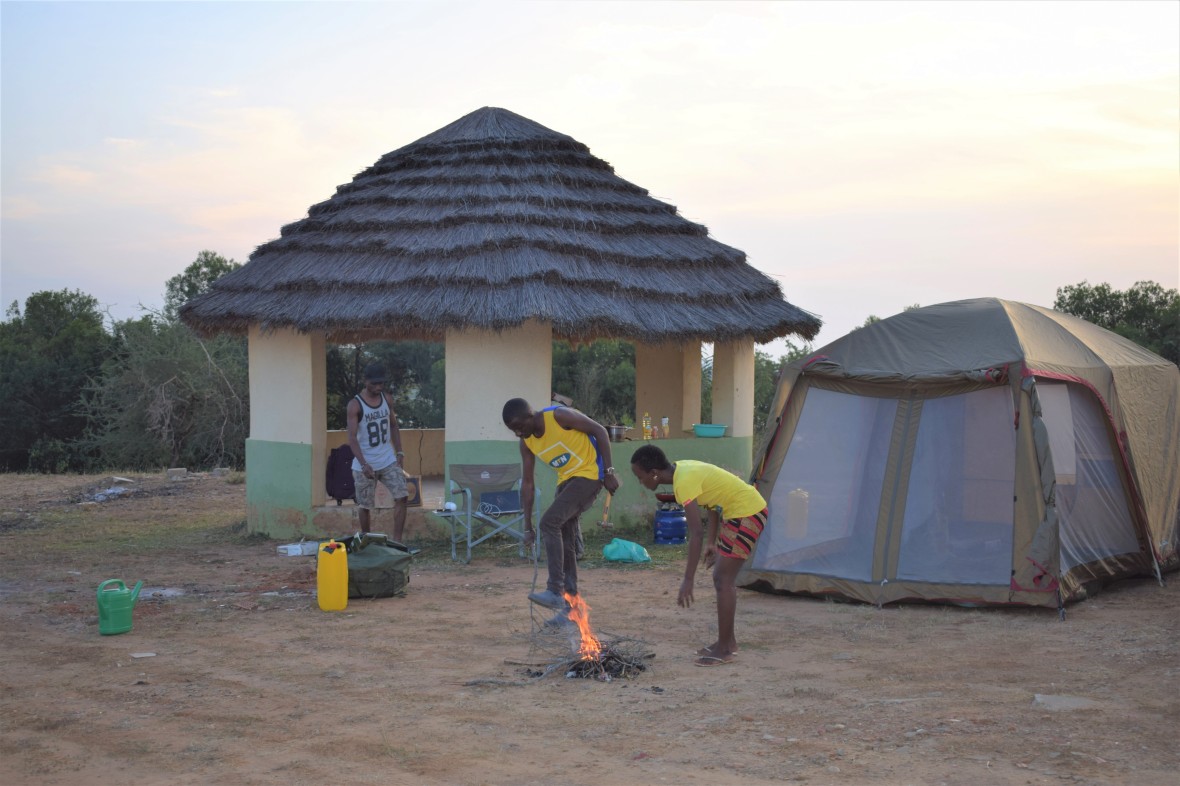 Setting up the camp fire

The drive through Budongo forest is pure heaven for bird lovers and as such holds the name the “Royal Mile”. Observing the 40km per hour speed limit not only keeps you safe, but also increases your chances of spotting one of the 451 bird species inhabiting the park. Don’t miss the playful troops of baboons along the roadside or the defiant ones seated in the road. They put up a good show!

This was the highlight of our trip! Murchison falls is a force of nature: the rushing water, the thundering roar as it crushes against the rocks, the constant splash back that left us soaked and the magical rainbows. This great display results from the mighty Nile taking the 45-meter plunge over the rift valley wall into the “Devil’s Cauldron”, making it one of the most powerful waterfalls in the world. 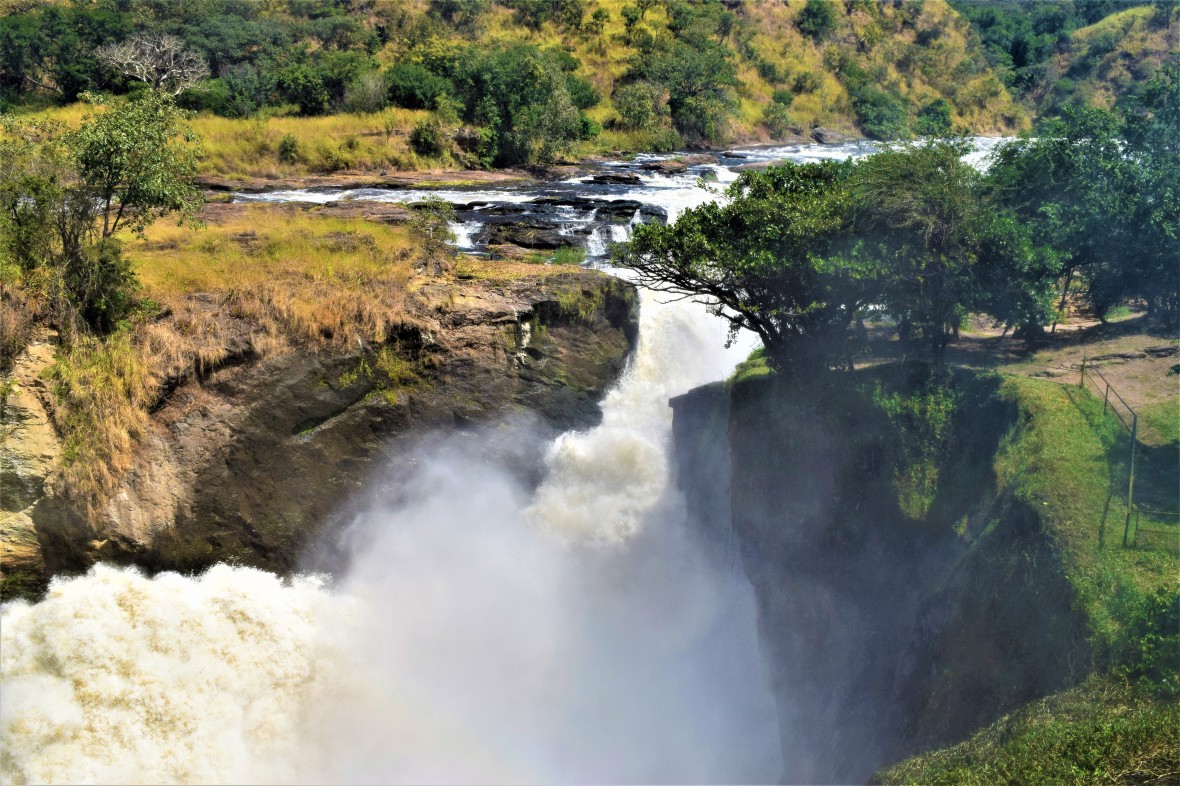 Murchison falls viewed from the top

Rainbows over the “Devil’s Cauldron”

The crew that made it happen

To cross from the Southern/forested side to the Northern/savannah side, you have to take the ferry (it carries both people and vehicles). If you arrive before the ferry does, enjoy a performance from the traditional dancers and dance like nobody’s watching: tipping is voluntary but polite! Take a picture at the world globe and for foreigners, spot how far you are from home.

Passengers and vehicles waiting to board the ferry

Spot how far you are from home!

This is a perfect way to enjoy another view of the spectacular Murchison falls. It’s also a chance to chill with the hippos, Nile crocodile and plenty of aquatic birds. Elephants, giraffes and buffaloes might be spotted depending on the time of day and the season.

Murchison falls viewed from the bottom of the falls (Google image)

An early morning or late evening drive gives you a better chance of spotting animals as they feed. We opted to do the early morning drive, at the Nile-Lake Albert delta which is one of the popular feeding grounds. Although we did not make is as early as planned, the drive never disappointed; from the flamboyant sunrise, to the savanna grasslands dotted with 76 species of mammals, to the unexpected car jam when the king (Lion) was sighted. It was everything and more. I will be back for more!

Stunningly beautiful sunrise over the savannah

A giraffe making a mad dash across the road

This is a chance to visit the many safari lodges within the park and make a pick for your next luxury safari vacation. I already have!